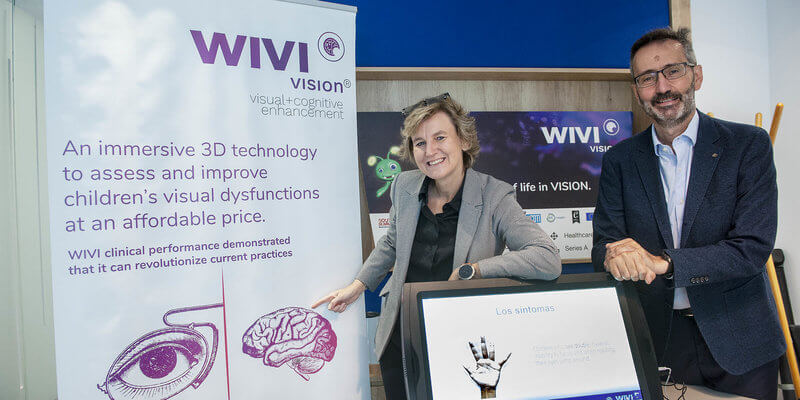 “The eye physio” is the title of the interview with our founders by Laia Bruguera in El Punt Avui, where she describes how WIVI Vision has developed a solution that takes advantage of the potential of artificial intelligence and virtual reality to evaluate and treat visual dysfunctions.

One of the great benefits of our system is that the user does therapy intensively, but also in a playful way, as if playing a video game.

As the article points out, the pandemic has multiplied the number of hours that adults and children spend in front of screens and, as a result, has led to an increase in visual problems in the population. And many of these dysfunctions are related to the neural and cognitive part of vision, and it is in this market niche where WIVI has specialized.

“People end up assuming that it is normal that after an hour of working with the computer they lose concentration or see blurry and this should not happen; our visual system has to be prepared to withstand eight to twelve hours without having any problem, “says Juan Carlos Ondategui, co-founder of the start-up.

The company has devised a solution that harnesses the potential of artificial intelligence and virtual reality to objectively assess dysfunctions of the neural and cognitive part of vision and treat them quickly and effectively.

“We are like the physio of the eyes; to you it looks like you are playing a game, but behind it there is a very complex technology”

Taking care of your vision, in its totality

The interview also tells how WIVI has specialized in this vision niche. Although only the first area is well known and widely treated, vision has three parts. The optical part deals with focusing and is compensated, if necessary, with glasses, contact lenses or refractive surgery.

But there are two more: the neural one deals with eye movements and allows us, for example, to move from a distant image to a near one or to jump from page to page when we read, and the psychic one, which focuses on coding and decoding and allows us to interpret whether a stick with a round is a b or a p.

If there is any problem in the latter two areas, it can be solved with vision therapy. The problem is that working on the optical part is much more profitable, because 65% of the population needs glasses, so there are very few professionals who work with the other types of dysfunctions.

Only 2% of optometrist specialize in the neural and cognitive part of vision, so a large part of the population is underserved. Ondategui was one of those professionals who did vision therapy and for many years, in addition to doing research, has worked with patients of this type. “I always wondered how I could reach the 98% of the population that was not being evaluated and also how the treatment could be shortened, because I had to do with very manual therapies that took almost a year.”

He has managed to find the answer together with telecommunications engineer, Eva García Ramos. “My mother had a neurodegenerative problem that was detected through her eyes; it was then that I realized that this was a sector that could technologically advance a lot,” explains the co-founder of WIVI.

The solution: the eye physio

The two partners spent many months researching and the result is a product that evaluates more than 50 different visual areas in a 15-minute session and allows all of them to be evaluated systematically, without waiting for symptoms such as blurred vision or headache.

The revolution also reaches the second phase, the therapy. With a 3D system that allows total freedom of movement, the user corrects his visual dysfunctions as if he were playing a video game. In addition, treatment time is reduced from 12 to 3 months, on average.

“We are like the physio of the eyes; to you it looks like you are playing a game, but behind it there is a very complex technology that means that when you receive a stimulation you improve different areas of vision at the same time, and the therapist does not have to think about what to do with each patient, but with its algorithms, WIVI measures their state and progress in real time and adapts to each person”, says García.

You can read the interview here